Apple Dryads are neutral mobs in found in Legends of Equestria.

Apple Dryads are deer-like creatures with light green eyes and dark green pupils, a green and pink coat and flowers on their antlers.

They can mostly be found roaming around The Heartlands in the woods. These creatures are neutral and do not attack on sight, unless the player attacks first which will force it to retaliate to protect itself.

The Apple Dryad attacks by headbutting with its antlers. 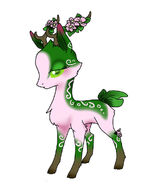