Legends of Equestria Wiki
Register
Don't have an account?
Sign In
Advertisement
in: Quests, Cantermore, Foal Story Arc,
and 2 more

Believe It Or Not

Believe It Or Not

Talk to Silver, Vogue, Scribble Jr. or Astral in Cantermore

Believe It Or Not is a quest consisting of a conversation about the legend of the Werepony of the Evershade Forest, available exclusively to Unicorn ponies. It is the second quest in the Foal Story Arc series of quests, starting from Foal Speed Ahead.

After completing the tutorial, the player is instructed to meet their classmates at the park in Cantermore. The quest can be advanced by either talking to Silver, Vogue, Scribble Jr., Astral or Flannie.

Journal: Miss Nova thinks it would be a good idea for me to go meet my classmates. They're in the park across from the school if I want to.

The player joins in the conversation where Scribble Jr. is talking about a meat-eating pony, which he reveals to be the Werepony of the Evershade Forest when asked by the player. Flannie then suggests that somepony should go into Evershade and find out once and for all, and Silver volunteers Scribble Jr. to do so. Astral agrees to go with Scribble Jr., while Vogue, Flannie and Silver declines to join. The player is then given a choice on whether to join the trip at that point of time, but regardless of the player's response, the player is told to meet at the Town Hall in Ponydale.

At this point, the quest counts as completed and the player can proceed on to the next quest in the series, An Equestrian Werepony in the Evershade.

The player will receive 2 bits and 300 XP in all talents upon completion of the quest.

Journal: Scribble told us about a werewolf pony in the Evershade. He and some of his friends from out of town are going into the Evershade to investigate. If I want to go with them, they'll be meeting in front of the Town Hall in Ponydale. 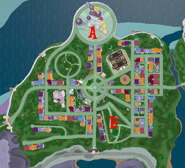 Locations in Cantermore used in the Believe It Or Not quest.
Community content is available under CC-BY-SA unless otherwise noted.
Advertisement