Short to medium (4 to 5 interactions)

Birthday Wishes is a quest obtained from Farmer Fields in Sweet Apple Orchard. It is an easy mission that does not involve combat.

Farmer Fields can be found behind the large barn in Sweet Apple Orchard. He is a dark grayish brown stallion, with moderate amber eyes and mane. He has a problem with his filly Li'l Galoshes, as the family doesn't know what to get her for her birthday. She seemingly hasn't liked the previous gifts they have given her and would like help in figuring out what to get her. As such, he tasks the player to find out what Li'l Galoshes wants for her birthday.

Journal: The Fields family want to get Li'l Galoshes a good present for her birthday this year. I should go talk to Grassy Fields to ask about previous birthdays.

Farmer Fields directs the player to speak to Grassy Fields to find out more about the previous birthday gifts that the family had given. She is located at the entrance to Sweet Apple Orchard. She will give a little more background on the situation, explaining how the gifts were all associated with her firefighting talent mark, and that the only gift she really uses are her boots. She advises talking to other ponies at the farm who might gives clues as to what Li'l Galoshes might want.

Journal: The Fields family want to get Li'l Galoshes a good present for her birthday this year. Grassy Fields explained what happened the last couple of years. I should find out why Li'l Galoshes didn't like her presents. Maybe if I ask around on the farm.

Grassy Fields suggests that the player should ask around the farm. As indicated by the quest marker, the next pony to ask is Wellington, who can be found standing in front of the tool sheds nearby. He will explain, in typical little brother fashion, that Li'l Galoshes likes mud and that would be the perfect gift. Further investigation prompts him to explain that she likes staring at the mud.

Journal: The Fields family want to get Li'l Galoshes a good present for her birthday this year. I should find out why Li'l Galoshes didn't like her presents. Wellington said she enjoyed his gift of mud. I should keep asking around the farm.

After talking to Wellington, it is time to find out from Li'l Galoshes herself. Depending on the dialogue choices, Li'l Galoshes may discover that her parents brought in outside help to figure out what she wants for her birthday, and may refuse to continue the conversation with the player. As such, the final reward may be reduced, unless the player truthfully admits that they are sent by her parents when further questioned. Even if she doesn't figure it out, she does know that they are thinking about what to get her.

She will explain that she likes gifts that remind her of home and family, and the other gifts were just about her job. She still treasures those gifts which is why she has stored them away for safe keeping, but they only remind her of her job and not her family. Eventually she'll ask for assistance in telling her parents what she really wants.

Journal: The Fields family want to get Li'l Galoshes a good present for her birthday this year. Li'l Galoshes didn't like the presents because they didn't remind her of family. I offered to tell her parents how she felt, but she doesn't want them to know she asked.

If Li'l Galoshes finds out that the player is lying to her:

To obtain the maximum possible reward, the player has to let Farmer Fields realize what Li'l Galoshes truly wants by choosing the most logical options. This can be done either by saying that they could get her anything, but it is the thought that counts, or by saying that she wants memories, as tools can be bought, but not a piece of home. In addition, when Farmer Fields asks about whether did Li'l Galoshes find out about the scheme, the player would also have to mention that she is a smart mare and will probably figure out on her own, which he will agree. Lastly, the player must not have the reward reduced from the earlier interaction with Li'l Galoshes.

Journal: Farmer Fields is grateful to learn what Li'l Galoshes wants for her birthday. 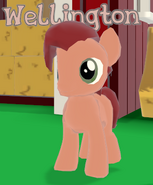 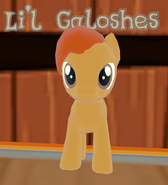 Li'l Galoshes will share with the player on what she truly wants
Community content is available under CC-BY-SA unless otherwise noted.
Advertisement