The Bramble Woods is a dungeon that is accessed from The Heartlands. It is a large, cavernous area filled with a variety of mobs and obstacle. The portal is behind a large thorny clump that is near the Heartlands Gate.

A few Diamond Dog camps can be found as well as a large beehive filled with hornets as well as some honey which can slow players down. At the end of Bramble Woods, there is a Haetea surrounded by several Diamond Dogs, Cockatrices and Lantern Monsters. Behind that last mob camp you can find the NPC Temporary Escape, who will lead the players back out of Bramble Woods to The Heartlands when being spoken to. He will also reward the players with Climbing Boots, one of following packages:

and (for Earth Ponies only) Jumping Boots. 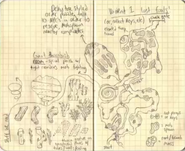 Early concept art of the map

A safe place in river.

A safe place near river in bramble woods.

A bind with plenty of dogs