Legends of Equestria Wiki
Register
Don't have an account?
Sign In
Advertisement
in: Quests, Cloudopolis, Ponydale,
and 2 more

Chlorophiliac is a quest obtained from Peacebloom located in Cloudopolis. It requires the player to do quite a bit of travelling.

Peacebloom is an orange mare with a curly green mane and tail and purple eyes who can be found in a secluded place in Cloudopolis, standing next to where the rainbow-colored waterfall ends in a small pool. The terrain may be difficult for an Earth pony to navigate.

Upon questioning about her stealing rainbow water, she will reveal her purpose and requests the player to fetch a number of "experimental plants" to help with her "rainbow-y" research. The items which she require include ten Cantermore flowers, five dandelions, two scoops of ruby dust and five mushrooms. She vaguely gives the locations where the items are located other than the mushrooms, and directs the player to talk to Bugsy, Klondike Hicks and Dancer for the exact locations of the other items when further questioned.

Journal (Open Server Event 3): Today I stumbled across a talkative mare named Peacebloom, clearly stealing rainbow water from the lake. Not only did she instantly confessed to her thievery, she enlisted me in locating some experimental plants that she hopes to infuse with her ill-gotten water. She wants me to get ten Cantermore flowers, five dandelions, from Ponydale, two gems from gem mines near Ponydale, and five mushrooms from the Evershade Woods.

Journal (Open Access Release, prior to V. 2018.08.01): Peaceboom is conducting an experiment on rainbow water. She needs ingredients from all over to do it.

Journal: Peaceboom is conducting an experiment on rainbow water. She needs ingredients from all over to do it.

The player can talk to Bugsy in Cantermore and Klondike Hicks in the Gem Mines for the exact locations of the mountain flowers and ruby dust respectively, where a quest marker will be added to the given locations. Dancer in Ponydale will give the player seven dandelions, while mushrooms can be found in the Evershade Forest near the path that splits according to Peacebloom.

Alternatively, the player can gather most of the items without communicating with the NPCs, the only exception being Dancer as dandelions cannot be picked up from the environment:

After talking to Bugsy:

After talking to Klondike:

After obtaining all the ingredients, the player must bring them back to Peacebloom. She will reward the player with a Raincloud Hat and the player will also gain 200 XP in all talents.

Journal: You have retrieved all the ingredients that Peacebloom needs. Your quest is finished.

Peacebloom's location (circled in red) as seen from the air a little ways away from the airship to Cantermore. 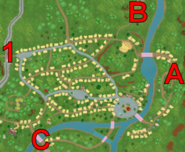 Locations in Cantermore for the Chlorohiliac quest
Community content is available under CC-BY-SA unless otherwise noted.
Advertisement