Clearing Up the Rainy Days

Clearing Up the Rainy Days

Talk to Loadsa Monet in Cloudopolis

68-80 bits depending on expenses

Clearing Up the Rainy Days is a quest obtained from Loadsa Monet in Cloudopolis. The player has the option to act very dishonestly during this quest.

Speaking to Loadsa Monet northwest of Cloudopolis central gives the player the option to aid Loadsa in cheering up a pegasus mare friend (he is very insistent it is not "marefriend") of his, one Rainy Days. To do so, Loadsa asks the player to obtain a cupcake for Rainy Days from Miss Chanteuse or Silver Platter alternatively as he is unable to compensate the player for Miss Chanteuse's cupcakes.

Miss Chanteuse can be found near the central pavilion in Cloudopolis, and a Lemon Surprise Cupcake may be obtained from her for free as she is giving them out as a sample. The player can also purchase the cupcake from her for 7 bits.

Alternatively, a Mini Cupcake can be purchased from Silver Platter at the Sugarcane Corner in Ponydale for 12 bits or received as a reward for completing the Good Egg quest. As Ponydale cannot be reached directly from Cloudopolis, either Cantermore or the Heartlands must be traveled through to reach it and then again to return.

Journal: Loadsa wants me to get a cupcake for his friend, Rainy Days. Miss Chanteuse or Silver Platter will have cupcakes.

Rainy Days can be found along the cloud bridge leading to the Cloudopolis Academy. She is overjoyed at receiving the cupcake, and the player has the option to lie both about the origin of the cupcake as well as whose idea it was to give it to Rainy Days. However, all subsequent dialogue assumes the player chose honestly, regardless of their actual choice.

Journal: I've given Rainy Days her cupcake. I should tell Loadsa how sucessful it was.

Loadsa Monet will reward the player with 80 bits upon claiming to have given Rainy Days the cupcake. The player will also gain 100 XP in all talents.

Locations in Cloudopolis for the Clearing Up the Rainy Days quest 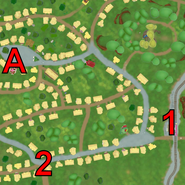 Locations in Ponydale for Clearing Up the Rainy Days
Community content is available under CC-BY-SA unless otherwise noted.
Advertisement