The Crystal Library is located in the western section of the Crystal Kingdom on 2nd Ring Northwest, between West-Northwest Avenue and North-Northwest Street. It features a large assortment of books, two circular tables for reading, and a ladder to reach the higher shelves. Stairs connect the various levels.

The Crystal Caves dungeon can be accessed from the library by having three players jumping on three ends of the snowflake on the second floor that make a ringing noise.

The Crystal Caves are a hidden dungeon below the library. To enter the caves, three ponies must be standing on the snowflake sign on the first floor: Two ponies must be standing on left and right corner of the snowflake facing towards the entry; a chime will can be heard when they are on the correct position. The third pony goes to the bookshelf in the center and pulls on the 4 book to the right of the center on the second shelf from the bottom. The book doesn't have a title on its spine and it is slightly glowing. The trigger can be activated by clicking the book and selecting "Pull!" or by pressing "T" (or whatever hotkey was configured for the "Talk" action) while standing near the book. If everything was done properly, all three ponies will be teleported to the caves.

Also, if one of the players has a pet, it can also be set at the desired point by clicking the " sit " button in the lower right corner of the screen. This will not affect anything,the pet will be on the surface, while both players will be teleported to the crystal caves

The caves consist of multiple distinguishable caverns that are connected by portals and separated by gates. The gate's color and texture determines the mechanism to open it. Some gates only open without mobs near them, while others open only if there are mobs nearby.

The entrance to the library, with NPC Minister Spindle visible 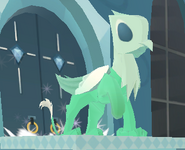 One of the gryphon statues in front of the Library

The books found on the shelves in the library
Community content is available under CC-BY-SA unless otherwise noted.
Advertisement