Talk to Skyhammer in Cantermore

"This is one of the five available quests that appeared during Legends of Equestria's second stress test. Skyhammer, the fjord horse, needs your help with an important task." ~ KillerJH2

Cutting it Close is a quest involving the player helping Skyhammer return a book to Final Ink. It is a short quest that takes place completely within Cantermore.

Skyhammer can be found outside a house in the Cantermore south-eastern residential district. When the player starts a conversation with him, he assumes that the player is seeking for a task. If the player agrees to help, he mentions about having no time to return a book to the library and requests the player to return on his behalf.

The book is to be returned to Final Ink, a librarian located outside the library between Cantermore Central Square and Cantermore University. Much to her annoyance, the book is actually overdue and that Skyhammer is trying to avoid the late returns fee by asking the player to return on his behalf. However, she still accepts the book from the player without asking for anything else.

If the player did not select the correct response:

Journal: You still need to return the book to Final Ink at the Cantermore library.

After returning the book:

Journal: Go back to Skyhammer and let him know that the book has been returned.

After letting Skyhammer know that the book has been returned, he reveals his displeasure with dealing with Final Ink, which is the reason why he did not return the book himself. He thanks the player for helping, but does not reward the player with anything. Nonetheless, the player still gains 1000 XP in all talents upon completion of the quest.

Journal: The book has been properly returned and Skyhammer is happy. 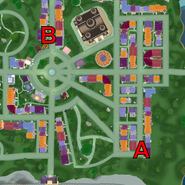 Locations for the Cutting it Close quest
Community content is available under CC-BY-SA unless otherwise noted.
Advertisement