Talk to Polly Poppet in Ponydale

Dust and Bunnies is a quest obtained from NPC Polly Poppet laying down in the park on the east side of Ponydale, across the river from the windmill and northeast of the Boutique. One of her bunnies has fallen ill and she needs a special medicine made of Ruby Dust to cure her.

Polly Poppet can be found in eastern Ponydale, past the river and roughly opposite of the windmill. By asking her whether if she needs assistance, she will mention that one of her bunnies is sick, and she requires ruby dust from the Gem Mines to make some medicine. She promises the player with a reward for collecting the ruby dust for her.

Journal (Open Server Event 3): Polly Poppet, the pet store owner asked me to find some rubies in the gem mines, so she could make some medicine for her sick rabbit.

Journal (Open Access Release, prior to V. 2018.08.01): Polly Poppet, the pet store owner, has asked me to find 5 rubies in the Gem Mines, so she could make some medicine for her sick rabbit.

Journal: Polly Poppet, the pet store owner, has asked me to find 5 bags worth of ruby dust in the Gem Mines, so she could make some medicine for her sick rabbit.

Ruby Dust can be found in the Gem Mines, northeast of Polly. They are randomly spawned in the northern section of the mines. The area is guarded by Husky Diamond Dogs, Manticores and Lantern Monsters, where the players must look out for when collecting the ruby dust. Ruby dust can be collected using the right-click menu or by running over them.

Return to Polly Poppet to conclude the quest. As promised, she rewards the player with 10 bits and 3 carrots. She also decides to reward the player additionally with a Rabbit Egg, where the player can use to spawn a pet bunny. 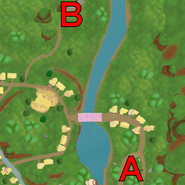 Locations in the Dust and Bunnies quest 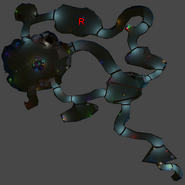 Ruby Dust can be found at the marked location in the Gem Mines
Community content is available under CC-BY-SA unless otherwise noted.
Advertisement