The earth pony is a playable race in Legends of Equestria, whose most notable trait is their special connection with animals. They start off with 300 Health and 105 Energy at level 1. Additionally they have 20 bonus Attack.

The starting town for earth ponies is Ponydale.

"Earth ponies are hard workers and grow food for the rest of Equestria. They tend to have a way with animals and can control them better. All that hard work also means that earth ponies can carry more things and last longer in battle."

Earth ponies are known for delivering moderate to strong attacks with minimal energy cost. This makes enduring long battles useful. Their skills, sorted by talents, are shown below.

Skills under the Base Talent are unlocked immediately, and award XP to all talents.

Earth Ponies have the fastest walking, galloping and sprinting speeds in-game, and use less energy when sprinting. In addition, they can access Animal Care and Farming abilities, unlocking pet combat and enabling the growing of seeds into useful crops. Earth ponies are also the only race which can obtain the Jumping Boots as a reward at the end of the Bramble Woods dungeon, providing increased mobility.

Seismic Buck being used on a Birch Dryad

Rough Terrain against a Dragon 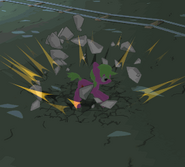