Equestria is the setting of Legends of Equestria. A diverse kingdom spanning different geographical regions, Equestria is home to mainly ponies, with other creatures scattered across the land.

As of the Open Access Release, not all of the locations planned by the development team has been implemented. Major locations that are currently available are shown in the map below: 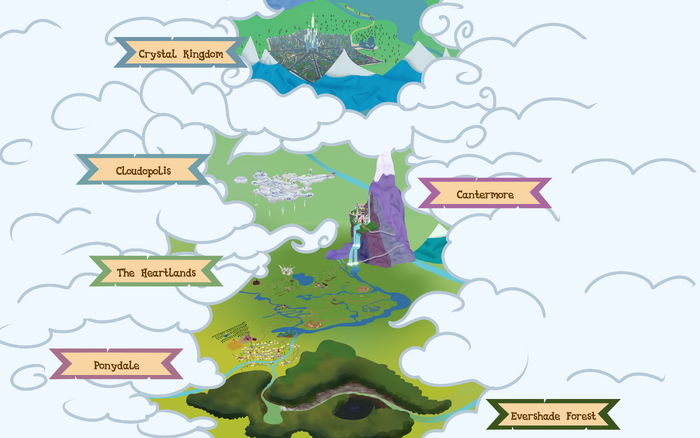 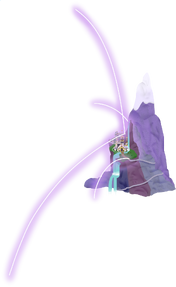 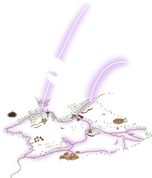 Legends of Equestria features a variety of regions, connected to one another with portals in each map. These portals allow for travel between major regions in the game, and are often located at the edge of the map. The locations in-game can be divided into four main categories: Towns, wilderness areas, minor maps and dungeons.

Cantermore is a city perched atop a cliff of a mountain. Waterfalls from the mountains stream through different districts in the city, which serves as the starter location for unicorns. Majestic palaces and observatories are lined across the far end of the city, overlooking the cliffside.

Cloudopolis is the starter location for pegasi, though other races are also able to visit the location. The floating city features structures reminiscent of that in Ancient Greece, with buildings made mainly of solid clouds. The rainbow waterfall can be found here, pouring from a reservoir atop a cloud.

The Crystal Kingdom is the northernmost town in Legends of Equestria, which is home to mostly crystal ponies. Crystal buildings surround a large central crystal palace, which is the iconic landmark of the region.

Ponydale is a small town which serves as the starter location for earth ponies. Straw-roofed cottages are the norm here, with more important buildings such as the town hall built out of concrete.

The Evershade Forest is home to a multitude of dangerous creatures that are either neutral or aggressive. The thick fog permeating the area, combined with the lack of a minimap, makes navigation in the region tricky. New players are advised to bring along a friend should they wish to explore this location.

The Gem Mines consists of winding tunnels that link caverns together. The tunnels are filled with polished jewels and luminescent crystals. Lantern Monsters that patrol the cavern tunnels may be a threat to lower-leveled players. Husky Diamond Dogs are also a common sight here.

The Heartlands is a vast open environment that connects Ponydale, Cloudopolis and Cantermore. Small forests and minor settlements dot the landscape. Some aggressive creatures, including Timberwolves and Husky Diamond Dogs roam some parts of this wilderness. Midway Village is a small town located in the middle of the area.

A vast wilderness, The Frontier is home to the old west town of Applewood. Dodge Juncture is located a ways down the track at a railway junction. A campsite next to a great plateau with a perilous climbing trail sits among the desolate landscape.

White Tail Park is an extensive park with winding trails and paths around a lake with a rolling landscape. It is connected to both Ponydale and The Heartlands.

The Crystal Library is a public building in the northwestern Crystal Kingdom. Two gryphon statues flank the entrance on either side. The mysterious Crystal Caves appear to be located beneath the library interior.

The Crystal Castle is the central building of the Crystal Kingdom, towering over the city. Inside, a reception area, meeting room, and the throne room are accessible. It is connected to the Crystal stadium via an elevated walkway.

The Crystal Spa is a small building found in the eastern section of the Crystal Kingdom.

The Crystal Stadium is an arena connected to the Crystal Palace in the Crystal Kingdom. An obstacle course surrounded by spectator stands dominates the area.

The Gall Hall is located in Cantermore, near the exit to The Heartlands. It contains an entrance area with stairs leading up to the main hall.

Ponydale Library is a building set into a tree. The library consists of a lower level filled with books, and an upper level serving as living quarters.

Sugarcane Corner is a confectionery shop found within Ponydale. Its brightly-colored exterior makes it stand out from most other buildings in the town.

Sweet Apple Orchard is a farm found west of Ponydale. Apple tree plantations, along with other crops, can be seen being cultivated here.

The Boutique is a building located on the SE outskirts of Ponydale (across the river from Town Hall).

The Bramble Woods is located near The Roost and the portal to Cloudopolis in the Heartlands.

The Crystal Caves can be accessed by three players using a sequence on the large snowflake in the Crystal Library.

The Dig Site is located in the Ancient Athamanes ruins in the Heartlands.