Equipment is any of a wide assortment items that ponies can wear to customize their appearance and abilities in Legends of Equestria. A total of eight equipment pieces can be worn at one time. They range from accessories (such as hats) to armor and weapons, such as the Wooden Sword. Equipment can be bought in NPC shops, such as those run by Bluebell in Cantermore and Buttercup in Ponydale, obtained as drops from Mobs, or received as quest rewards.

Only one piece of equipment can occupy a specific equipment slot at the same time. Each equipment item has a designated slot (or in a few cases, two slots), and can only be placed in that slot. With the exception of dual-slot items, what is in one equipment slot has no effect on what can be placed in another. 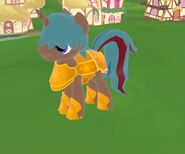 An example of the Dandelion Bracelet item equipped on a character 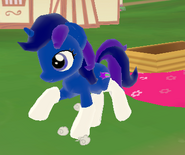 An example of the socks item equipped on a character 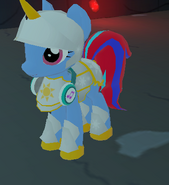 A player wearing the sunlight Armor Set, with a pair of Hullabaloo's Headphones
Community content is available under CC-BY-SA unless otherwise noted.
Advertisement