Into the Unknown
Echelon
1000 Years
Moonlight

The Evershade Forest is a mysterious and dangerous forest with sprawling, winding pathways, reached from a portal in southeastern Ponydale. It is home to some of the highest-level mobs in the game.

When in the forest, the player's minimap will be disabled, forcing the player to rely on their sight and memory to navigate around the forest. A dense fog that reduces the player's visibility makes navigation more difficult, possibly even resulting in the player getting lost.

The terrain of the Evershade Forest is rather diverse, with many natural formations making up the landscape. Certain areas in the forest have no clearly defined path, potentially causing players to stray from their intended route. While pegasi can fly in the forest, there is a limit to how high they can fly— usually no higher than the canopy.

The Evershade Forest has three separate zones with their own points of interest. These maps are linked by portals which players have to find.

Evershade Forest: Into the Unknown[]

This is the first map which players will enter when accessing the Evershade Forest from Ponydale. It contains portals that link players to the other two maps in the forest. Mushrooms can be found near the entrance for players to pick up. A slow-moving river runs through this map, with wooden bridges or hollow logs connecting its banks. Players can however choose to swim across this river, albeit at a much slower speed. Plateaus are a common land form here, with monsters such as Timberwolves and Husky Diamond Dogs clustered on or just below them.

Mysterious hoof-shaped statues in the ground point towards the exit of the map, giving the players a hint to the exit portal's location. A campsite can be found in this map, where Diamond Dogs spawn more frequently.

This map is accessed by entering a portal located upstream of the river in the first map. This area features two points of interest: the Shaman's hut and the Poison Joke field.

Players entering the map can immediately view the hut a short distance away. The hut is a living space built directly into a large tree in the middle of a glade. Tribal masks are scattered nearby, illuminated by yellow light shining out of the hut's windows. The mysterious witch known as Yaba Baga can be found next to it. Players are currently unable to enter the hut.

A beam of light can be seen shining downwards from the sky in the map, serving as a guide to players wishing to visit the Poison Joke field. There are currently no effects to be gained from walking through the field. Birch Dryads are present in this map, wandering around the bridge to the field.

Near Shaman's Hut. Alicium Ore can be mined there

This map can be accessed by entering a portal on a river bank downstream of the first map. Arriving players will find a fast flowing river shrouded by a thick mist. Jumping into this river will result in players being teleported back to the respawn area in the map (near the portal), so the river can only be crossed by flying over it, or by using the long wooden hanging bridge further down the path.

Running parallel to the opposite bank of a river is a misty road that will lead players to a ravine with a broken bridge. This, combined with an invisible barrier, allows players to only catch a glimpse of Moon Castle. A few level 50 and level 65 Dragons along with some level 45 Timberwolves can spawn near the ravine, posing as hazards to explorers.

Near the dragons Elementium Crystal can be mined.

Moon Castle consists of a central, circular structure, with several pillars surrounding it. The building is mostly in ruins, with crumbling stones and shattered windowpanes. Inside the building is a pedestal with six spherical stones on it, which is likely a reference to the Elements of Harmony.

A variety of mobs can be found in the Evershade Forest, with a wide range of combat levels.

The gallery archive can be found here.

A rope bridge with fog below

The fast-flowing river, shrouded by a mist

The ritual area, which was clarified in Evershade Northwest 2014 to be a minor side project by one of the 3D modellers, without any significance to the game. 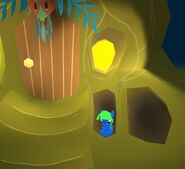 Part of a tree hut

A campsite where Diamond Dogs spawn