The Gem Mines located north-east of Ponydale are filled with tunnels and glowing crystals. The entirety of the Gem Mines is roofed over, limiting the height a Pegasus can fly. There are only a few areas where the ceiling is high enough to hover well above the ground to evade ground mobs.

Husky Diamond Dogs, Manticores and Lantern Monsters from levels 1-5 can be found roaming the tunnels.

Ruby Dust that can be picked up spawn occasionally in specific caverns. More precisely, the Northern Chamber when you first encounter Lantern Monsters, just after the chamber with Manticores and Husky Diamond Dogs. They will be collectibles on the ground, however, despite rubies being red, they currently hold no specific color and can be blue, yellow, green, etc.

Three NPC's can be found in the Gem Mines. 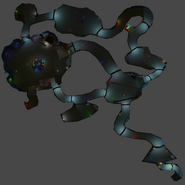 Copper vein in Gem Mine 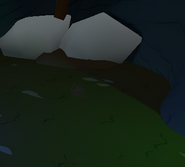 Coal vein in Gem Mine, almost invisible due to its dim color

Tin vein in Gem Mine
Community content is available under CC-BY-SA unless otherwise noted.
Advertisement