An account must first be registered on the forums, in order to login to the game. Players must then download the latest client software from the website. Once this is done, the game can be played when the game servers are open.

There are specific clients for different operating systems (OS). The correct one must be downloaded and run in order to play the game. There's also a launcher for Windows, which simplifies the download and installation process.

There are a few servers to choose from upon logging into the official Legends of Equestria client. In each server, there are multiple instances of the game. Players must join the same server and instance in order to see each other in-game. Players can switch to a different instance by clicking on the instance ID on the top left of the screen underneath the map. Each instance has a capacity of 150 players. 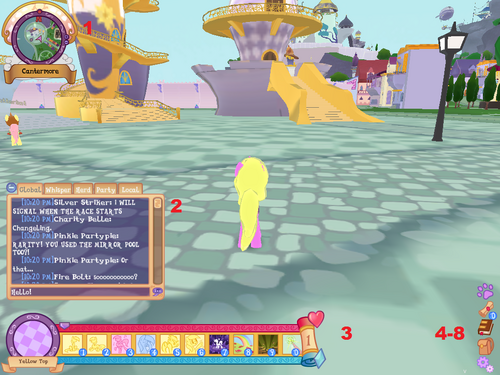 The graphical user interface(s) (GUIs) for each type of pony follows the same format with only slight differences. What they share in common are the following:

Both the mouse and keyboard are used in this game. The mouse allows one to target players and mobs or perform actions with a left-click, and open menus for actions with a right-click. Non Player Characters (NPCs) can be interacted with by right-clicking them, which will reveal a menu with options such as Talk or Shop.

), and then left-clicking to select the destination, at the cost of energy.

Icons on the skill bar are either emotes, or maneuvers or attacks that are specific to the races, and are elaborated on their respective pages.

Some NPCs will ask players to perform specific tasks when spoken to. These quests can take anywhere from a few minutes to several hours to complete, and may or may not yield rewards. While many quests are simple favors, others may require venturing into dangerous territory like the Evershade Forest.

Mobs are targeted just like players by left-clicking on them to view their red health bar, although they don't display the blue energy bar that players have. Once a mob is targeted, selecting a skill from the hotbar will allow the player to attack the mob when in range. Targeting players allows the opportunity for unicorns to heal them using the Heal skill, or for player-versus-player (PvP) combat if within a sparring area.

Various places in the game contain Mobs. Most mobs can be confronted when they appear individually, but groups of mobs can easily overwhelm a player. Upon fainting, players respawn at the entrance of the map that they came from without any loss of items. It is hence better to travel in dangerous places with friends for protection when danger arises.

Launcher 0.1 in OSE 9.
Community content is available under CC-BY-SA unless otherwise noted.
Advertisement