"This is one of the five playable quests that appeared in the second Legends of Equestria stress test. This is also the second quest that Silver Platter appears in. If played correctly you will be in for quite the treat; the quest has slightly different rewards for the player depending on their actions throughout the quest"  ~ KillerJH2

The player can talk to Silver Platter at Sugarcane Corner to start the quest. Silver Platter is baking a three tier cake for a fancy reception in Cantermore, but he has ran out of eggs. Hence, he tasks the player to collect six eggs from Farmer Fields at Sweet Apple Orchard in return for the pie that he made for the family the week before.

Journal: Go get the eggs from Farmer Fields at Sweet Apple Orchards.

Journal: Get the eggs to Silver Platter. Are you sure you have enough?

Upon bringing the correct number of eggs back to Silver Platter, the player will be rewarded with six cookies, six cupcakes and 100 XP.

Journal: You helped Silver Platter and everyone is happy!

Locations in Ponydale for the Good Egg quest 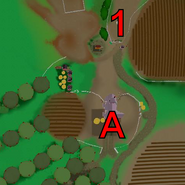 Locations in Sweet Apple Orchard for the quest Good Egg
Community content is available under CC-BY-SA unless otherwise noted.
Advertisement