Talk to Klondike Hicks in the Gem Mines

Klondike Hicks may be stuck in his idle dialogue, preventing the quest from being started

Klondike Hikes is a quest that can be initiated by talking to the NPC Klondike Hicks inside the Ponydale Gem Mines. Klondike has forgotten where he left his pickaxe and asks the player to help him look for it.

I have made the acquaintance of Klondike Hicks, a salty old prospector in the gem caves. He lost his pickaxe deep in the mines and asked if I could be so kind as to retrieve it. I accepted, either due to my sense of righteousness, or because I feel guilty saying no to old people.

What's that stuck under those rocks? An old pickaxe! This must be the one that Klondike Hicks lost! I'd better get it back to him.

I have returned Klondike's pickaxe and all is fine in the world.

The quest can be started by speaking to Klondike Hicks, who can be found in a large cavern inside the Gem Mines. He will say that he has forgotten where he left his pickaxe and will ask the player to help him look for it in the southern half of the mines.

The pickaxe is located at the northeast corner of the map, embedded in some crystals by the wall. Its location is marked via a yellow exclamation mark. It can be obtained by clicking it and selecting "Pick up".

After obtaining the pickaxe, talk to Klondike Hicks again. He will mention that he forgot about asking the player to look for it and has already gotten a new pickaxe. As a result, he offers the old pickaxe to the player. (Due to a bug, the player may receive an additional pickaxe.)

Alternatively, if the player has sold off the pickaxe after obtaining it, talking to him will also mention that he has already gotten a new pickaxe, and assures the player that it is all right. The player is then given a choice to ask whether if the pickaxe that was sold was his favorite or just leave it that way. If the player chooses the latter, the quest is considered completed too. 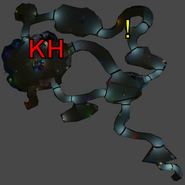 The pickaxe as it is found by the player
Community content is available under CC-BY-SA unless otherwise noted.
Advertisement