A flower from high up in the mountains of Cantermore.

A mountain flower is an item that can be picked up from the environment.

Mountain flowers spawn in northern Cantermore. Prior to Open Server Event 10, they only appeared among the trees in an area underneath the airship platform (and portal to Cloudopolis) mixed in with smooth rocks.

Since OSE 10, two additional locations were added, both adjacent to the eastern end of the river that separates the Palace grounds from the rest of the city. One is on the upper switchback level leading to the airship platform while the other is on the south bank, near a mountain waterfall.

The Chlorophiliac quest requires the player to pick up ten of these flowers.

As of the Open Access Release, they can also be worn as an equipment, occupying the hats slot. 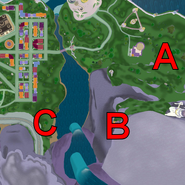 Mountain flowers spawning near the observatory 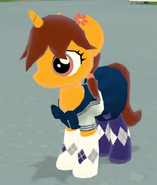