Legends of Equestria Wiki
Register
Don't have an account?
Sign In
Advertisement
in: NPCs, The Heartlands, Earth pony, Quest ponies

Midway Village in The Heartlands

Olga Ulfstig is an earth pony NPC standing in front of Swift, a little ways from the Midway Village fountain. However, when spoken to, she maintains a conversation with the player instead of Swift. She also participates in the player's conversation's with Swift during the Mindless Violins quest. 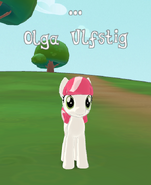 Olfa Ulfstig as introduced in OSE 5.

Olga Ulfstig as seen during OSE 9