Town Hall
Ponydale is the starter town for earth ponies. It is a small town with many cottage-like buildings featuring thick straw roofs. The silhouette of Cantermore castle is visible in the distance if one looks towards the mountains. A train station that allows transportation to either Cantermore, the Crystal Kingdom, or Applewood can be found to the north-west corner of Ponydale.

Sweet Apple Orchard is an apple farm just a short walk away from Ponydale (just pass the train station). Although mainly apples are grown in this farm, carrots and other crops are cultivated as well. Low-leveled Bunnies are scattered about in the back field making it a good place for new players to train up their combat talent.

Sugarcane Corner is a confectionery shop located in the heart of Ponydale. Its unique gingerbread-frosted roof makes it a distinct landmark among the straw-roofed cottages in the town. Players may enter the building, which serves mainly as a gathering point for groups. Various music from the Brony community is played as the location's soundtrack.

The Gem Mines is a cave system accessible from the northeastern edge of the town. Luminescent crystals and gems litter the tunnels, providing faint illumination. Low-leveled Husky Diamond Dogs can be found patrolling the mine, making this place an ideal location for new players training combat. A few artisan crafting stations can be found outside the entrance.

Ponydale's town hall is the most iconic building within Ponydale, rising above most other structures in the vicinity. Other than being a landmark to aid players in local navigation, the town hall holds no other purpose.

The Boutique is a building which serves as both living quarters and a clothing store (SE section). Inside the boutique, the merchant NPC Marvell can be found selling some clothing items and patterns. He's also selling linen and canvas scrap required for crafting many artisan items.

Ponydale Library can be found in the northwestern region of the town. The structure is built directly into a large tree, with a bedroom on the upper level. Open books can be found on the ground floor, though they are blank. A stairway leads to the basement level, which is blocked off by a locked door.

The gallery archive can be found here.

Sugarcane Corner location as of Pre-Alpha 6

The flower shop on Ponydale Marketplace, opposite Sugarcane Corner, with NPC Maplesweet (OSE9)

Ponydale map with landmarks and portals according to OSE 9 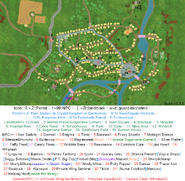