Basement
Upper floor
The Ponydale Library is a structure made within a tree, unique from the normal straw roof houses of Ponydale. It has a total of two rooms, each room comprising an entire floor. The ground floor features bookshelves filled with books that cannot be taken out, though some blank open books are scattered across the central circular table. A staircase leads to the basement of the library.

The second floor of the library (which is a separate zone accessed by an invisible portal on the stairway) is filled with more books, as well as a bed, a fireplace, and other ornaments suggesting that the area serves as living quarters.

The basement (which is also a separate zone) contains area of studies, more books scattered around, and even a enormous telescope, however there is a hidden path behind one of the bookshelves that leads to a small cavern with a small room located nearby. This room appears to be a research lab with a ominous skeletal structure with candles laid on the base.

The library is in northwest Ponydale, at a crossroad a short distance from the train station. 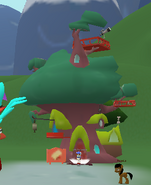 The basic tenets of unicorn magic. All books on the ground floor are copies of this book. (Click for transcript) 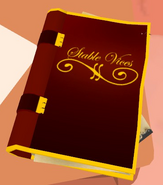 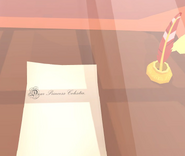 Letter paper found on the desk in the bedroom, addressed to Princess Celestia

Several books found on another desk in the bedroom; click for transcript of the one on the right
Community content is available under CC-BY-SA unless otherwise noted.
Advertisement