Legends of Equestria Wiki
Register
Don't have an account?
Sign In
Advertisement
in: NPCs, Earth pony, The Heartlands, Quest ponies

The Heartlands, near Cloudopolis warp

It Belongs in a Museum; Involved in Mindless Violins

Pyrite is an earth pony NPC who can be found on the path linking Midway Village from the Cloudopolis portal once the player has graduated. He plays a part in the Mindless Violins quest, where the player would need to interact with him for a few times. He also starts the It Belongs in a Museum quest once Mindless Violins is completed. 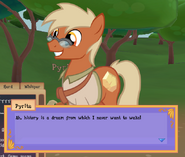 Pyrite in the Mindless Violins quest 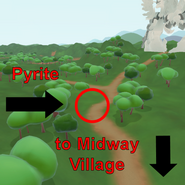 A little help in finding Pyrite
Community content is available under CC-BY-SA unless otherwise noted.
Advertisement