Legends of Equestria Wiki
Register
Don't have an account?
Sign In
Advertisement
in: Quests, Cantermore, Ponydale,
and 2 more

Talk to Hullabaloo in Cantermore

Hullabaloo's Party
Removing Cookies and Browsing Data is a quest obtained from Hullabaloo in Cantermore. It is an easy but tedious mission which requires the player to travel back and forth to relay information.

The player must have graduated to obtain this quest.

Hullabaloo has asked me to retrieve a basket from Flan at the Paso Fino Cafe.

After retrieving the basket:

I got the basket from Flan. Now I just need to take it back to Hullabaloo.

After delivering the basket to Hullabaloo:

I delivered the basket to Hullabaloo, but the cookies are missing. I should ask Flan if she knows why.

I need to find Cirrus, Scribble, and Geizhufe and talk to them.

After talking to Cirrus, Scribble, and Geizhufe:

After talking to Wayward:

Wayward ate the cookies but he claims the sign said something different than what Flan claims to have written. I should return to Flan and see if she still has the sign.

After talking to Flan:

I need to ask Cirrus and Scribble if either of them altered the sign.

After asking Cirrus and Scribble:

I have asked the suspects about the sign. I should return to Flan with my findings.

After returning to Flan:

I have the hoofwriting samples from Scribble and Cirrus. I need to return them to Flan.

After returning samples to Flan:

Cirrus's hoofwriting sample was a match! I should confront him about this immediately.

I solved the mystery and made Cirrus pay for the cookies. Now I just need to get the money I spent back to Hullabaloo.

I solved the mystery and gave Hullabaloo back his money.

At the start of the quest Hullabaloo tasks the player to pick up the "Paso Fino Perfect Party Pastry Pack" from Flan. Upon giving the pack to Hullabaloo, it is discovered that the cookies are gone, and the player has to find out who is the cookie thief,

Upon talking to Flan again, she reveals that she had let three ponies into her store before the cookies were stolen, which are Scribble, Cirrus and Geizhufe. The player has to then talk to these three ponies; Geizhufe reveals that Wayward was in the shop instead of him, whom the player has to talk to as well. Wayward will reveal that the sign in the store states "do steal" and it was him who ate the cookies, upon which the player have to return and update Flan on the status.

The handwriting will then be compared by Flan, and the culprit is found out to be Cirrus based on the handwriting from his diary. The player will then have to find Cirrus again, at which point Cirrus will then admit that the true culprit was him and that he will compensate Hullabaloo.

The player then has to return to Hullabaloo and give him the compensation, after which Hullabaloo will give the player a reward for completing the quest.

Hullabaloo rewards the player with headphones and 487 XP at the end of the quest. The headphones will only be awarded if the player finds the true culprit, however; paying off Hullabaloo without proving your innocence will not result in this reward.

There is a known bug that when talking to Wayward, players may get stuck in the "I can't talk right now and don't stomp so hard" dialogue tree which cannot be exited directly. To get around this, the player must first talk to Cirrus in Cloudopolis and then return and talk to Wayward.

The player has to talk to Wayward, which will reveal that he ate the cookies 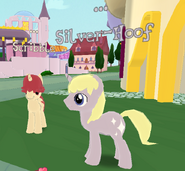 The player has to talk to Scribble multiple times throughout the quest too, which will also trigger responses from Silver-Hoof

The player has to talk to Geizhufe, who will tell the player to look for Wayward instead

Locations in Cantermore for the Removing Cookies and Browsing Data quest

Locations in Cloudopolis for the Removing Cookies and Browsing Data quest

Locations in Ponydale for the Removing Cookies and Browsing Data quest
Community content is available under CC-BY-SA unless otherwise noted.
Advertisement