Talk to Skye in Cloudopolis

Rooftop Rumble is a Pegasus-exclusive quest, that involves Skye with a feather flu, being a victim of a prank.

The quest can be started by speaking to Skye at her home, who is located at Cloudopolis. East of Air Mail's post office and South of the Rainbow Water Fall.

Skye claims she hears stomping on the roof of her home. When she goes out to see who or what it is, they're long gone before they come back to disturb her when she's not looking again. The player volunteers to check it out.

Journal: A little filly named Skye say's she's hearing noises on her roof that sound like hoofsteps. I'm not sure how much noise hooves can make on clouds, but she said it's keeping her awake. I told her I would check it out.

Upon investigating the roof, the player can find two foals there: High Tide and Crescent Moon. It turns out they were playing a prank on Skye, but Crescent Moon thought that they were trying to make Skye laugh because Skye has the feather flu and needs cheering up. High Tide, on the other hoof, was trying to annoy Skye (and all the other ponies she's played pranks on) because she thought it was funny. The two begin two argue, but the player soon steps in and talks them out of playing mean pranks.

Journal: After chatting a bit, I found out that High Tide and Crescent Moon weren't on the same page with their antics. However, I stopped their fighting before it got too bad, and they'll play nice from now on. I'll go tell Skye not to worry about them anymore.

The player returns to Skye and informs her of the situation. Skye is much happier now that they have promised to keep the noise down and thanks the player.

Journal: The fillies on the roof agreed to stop making noise on Skye's roof, though they didn't promise to leave.

Upon completing the quest, the player will be rewarded with 100 bits and 250 XP 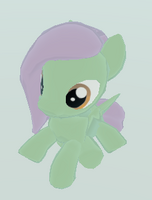 Skye is suffering from the feather flu.