Short (2 to 3 interactions, depending on player's choices)

Refusing to give the Pumpkin Eater to Pumpkin Pie:

500 XP in all talents
Giving the Pumpkin Eater to Pumpkin Pie:

50 XP in all talents

The Straight and Narrow quest tests a player's moral integrity by presenting them with a choice: help Beet put the neighboring pumpkin farm out of business, or to refuse and forego the promised reward.

The quest can be started by speaking to Beet on her beet farm next to the Pumpkin Patch in the Heartlands, upon which she will give the player a Pumpkin Eater, to perform the deed of putting the neighboring pumpkin farm out of business for a surprise reward.

Journal: Beet, a farmer in the Heartlands, has given me a creature called a "Pumpkin Eater", and instructed me to give it to Pumpkin Pie.

The player can walk over to the neighboring pumpkin farm to talk to Pumpkin Pie.

Going through with it[]

Pumpkin Pie will be confused as to what is going on as the player asks him to put the Pumpkin Eater beside his pumpkins, but he still accepts it anyways.

Journal: I did it. I'd better hightail it back to Beet.

Alternatively, the player can decide not to go ahead with the deed by not handing over the Pumpkin Eater to Pumpkin Pie after talking to him.

Journal: I decided not to go through with it. I'd better hightail it back to Beet.

Going through with it[]

Once the player has handed over the Pumpkin Eater, they can go back to Beet and either admit or lie about doing the deed. She will be disappointed in the player and reveal that it was all a test, and does not reward the player in anything. However, the player still gains 50 XP in all talents.

Journal: Apparently this whole exercise was a test. Beet was very upset with me and gave me a lecture after I gave the "Pumpkin Eater" to Pumpkin Pie.

Doing the right thing/Change of mind[]

Journal: Apparently this whole exercise was a test, and Beet was overjoyed that I decided not to sabotage Pumpkin Pie's farm. 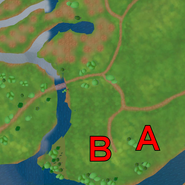