Medium to long (8 to 10 interactions)

Sugar is one of several quests available to teach about the talent trees. Each of these quests are the fourth quest in the Foal Story Arc and they are mutually exclusive from one another. The quest is obtained from Frizzy Stradlin, Starburst Nova, or Windhover depending on the player's pony race. This specific quest is designed to teach the basics of the Partying talent tree and is open to every race.

If the player decides to choose partying as their talent, they can query about whether partying can be a talent with their teacher, who will direct them to look for Wobble Bass at a Ponydale dance club.

Journal: My teacher directed me to Wobble Bass at a Ponydale dance club. Hopefully, he can teach me about Partying.

Wobble Bass is located in Ponydale in front of the bowling alley. He greets and guesses that the player is a student, and will go on to share about the importance of being a good host, which includes being a good baker. He then offers the player a cupcake as an example, and continues chatting before noticing that the player does not look to good. Before Wobble Bass finishes his sentence, the player finds themselves at the windmill, after an intense off-camera sugar rush.

Journal: After running around and meeting some very rude ponies, I feel exhausted and sick. That's not what a party is supposed to be like, right? I'm going back to Wobble Bass to see if he can tell me what's going on.

Wobble will question his cupcake recipe. If the player questions him, he also mentions that he may have added two or three portions of sugar and that he also had some help in making the cupcake. He then moves on to a more important matter, where Shelly and Stump are about to have a major magic duel in the park because of some missing friendship bracelets. It is then revealed that one of the bracelets was dropped into the cupcake mix, after the player coughs up the bracelet. Wobble Bass wants the player to calm the situation down and teaches them the first lesson about keeping a cool head when things go wrong. He then teaches the player the Candy Shower skill which can calm ponies down, and gives them an option to try out the skill on him.

Use Candy Shower on Wobble Bass. Despite the journal entry indicating that three times are necessary, only one time is needed and once it's done the conversation will immediately recommence.

Journal: Wobble Bass taught me a way to calm down other ponies, and it's called a Candy Shower. It is what it sounds like. I can try it out on him to make sure I know what I'm doing.

At this point, the player is taught Pillow Barrage, and again an option to practice the skill on Wobble Bass is given.

Journal: Wobble Bass has taught me another skill called Pillow Barrage. I can hit targets with a bunch of pillows, and it slows them down. I'm gonna test it out on Wobble to make sure I understand how it works.

Now that the player has shown basic competence in party throwing, they are then sent to help to de-escalate the fight between Shelly and Stump and talk to them about their friendship problem.

Journal: Two unicorns at the edge of town, Stump and Shelly, are threatening to have a magic duel over their lost friendship bracelets, and damage the town along the way. I need to find a way to calm them down. Wobble Bass suggested using my new candy shower or pillow barrage abilities. Then I should give them their bracelet.

Speak to Stump or Shelly to learn more about the argument. Even though the found (regurgitated) friendship bracelet is returned to Stump, Shelly still thinks that Stump threw it out despite Stump's claim otherwise. The situation still needs calming. A Candy Shower just might do the trick.

Journal: I've given Stump his bracelet. Before trying to find Shelly's bracelet, I should use a Candy Shower to calm them down.

Using Candy Shower immediately restarts the conversation, with both Shelly and Stump calming down enough to realize that Stump wasn't lying and the two apologize to each other. This still leaves the question as to what happened to Shelly's bracelet. Leaving the conversation at that point does not end the quest. When the player offers to help, Shelly recognizes them as the pony who had the sugar-induced rampage. The player can own up to it or lie but it makes no difference in the end. Shelly remembers a grey earth pony colt who brushed past them earlier. They briefly argue about where the grey colt went but eventually settle on the tracks.

Journal: Shelly and Stump suspect that a grey colt stole their bracelets. He was heading for the railroad tracks. I better see if I can find him.

The grey colt is named Iron Saddle and he is located at the train tracks near the warp circle to Sweet Apple Orchard. After speaking to him and dismissing his first story about him wanting chaos in the town and not liking the parties hosted by Stump and Shelly, the player learns that he actually stole the bracelet to sell so he could buy a ticket out of Ponydale to return home. He returns the bracelet, grousing that he will find some other way to leave Ponydale.

Journal: I got the bracelet from a colt named Iron Saddle. I should return it to Shelly to amend things with Stump.

Return the bracelet to Shelly. Both she and Stump will thank the player and express their eagerness in attending the player's party if they ever throws one.

Journal: I've returned both bracelets to Shelly and Stump I should go see Wobble Bass about my reward.

WARNING: This is the very last chance to complete any foal-only quests. After this conversation with Wobble Bass, the player becomes an adult and those quests are no longer available.

Speak to Wobble Bass one last time. He is initially worried about the player, thinking that they went on another sugar bender. The player explains the whole story to him, and he will then share with the player that they have learned the true meaning of being a party pony. He encourages the player to continue practicing and improving the skills that they have learned, as well as learn new skills, and that he will be happy to hang out if the player wants to catch up with him.

Once the conversation ends, a reward of 300 Bits and 600 XP in the Partying talent tree will be given.

At this point, the player will become an adult and is automatically warped to Cantermore to start on The First Day of Our Pony Lives quest, which is the final quest in the Foal Story Arc.

Journal: I'm a super-duper party pony! I always knew that was the kind of pony I would be!

Stump and Shelly are about to fire up the town... literally! 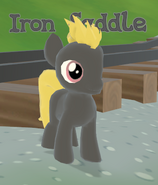 Iron Saddle is in a rush to get out of Ponydale 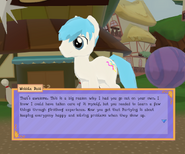