Sugarcane Corner is a building that players can enter in Ponydale. This building is rather easy to find among the other buildings, as its roof looks like a frosted ginger bread among the other straw roof houses. Players can access the main room, the kitchen, and the second floor. However, the home area, which resembles stacked cupcakes atop the building's roof, does not appear to be accessible. Throughout the previous Open Server Events and into Open Access, live music from the community of bronies has served as the soundtrack for Sugarcane Corner, currently from PonyvilleFM. 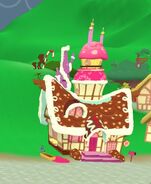 Sugercube Corner from the outside (Pre-alpha 1-5)

The mixing room of Sugarcane Corner.

The kitchen, which connects the main room and the mixing room.
Add a photo to this gallery
Retrieved from "https://legendsofequestria.fandom.com/wiki/Sugarcane_Corner?oldid=23476"
Community content is available under CC-BY-SA unless otherwise noted.