Legends of Equestria Wiki
Register
Don't have an account?
Sign In
Advertisement
in: Article stubs, Places, The Heartlands, Zones

The Heartlands, also known as Equestrian Heartlands, is a vast transition area, linking three major cities (Cantermore, Cloudopolis, and Ponydale). It has a size of about five times that of Cantermore. Multiple points of interest can be found in The Heartlands, most notably the Midway Village.

According to the NPC Rear Echelon, the Heartlands is considered to be a wilderness area. This is emphasised by the number of mob clusters in the area, such as Husky and Corgi Diamond Dogs, Lantern Monsters, and even Dragons.

The Midway Village is found at the intersection of the roads leading to Ponydale, Cantermore and Cloudopolis. The NPC Chestnut Spruce runs a furniture shop here, while Cherries Letrotsky is in charge of the village's inn. Neigh Sayer, Briquette, Olga Ulfstig and Swift can also be found in the village.

A trio of Bunnies can be found hopping around the grass under a tree in the village.

Two houses are located near but separate from the village. To the north is Foreshadow's retreat, the Hermit's Cottage and to the northeast is Heartlands Cottage.

There is farming spot behind one of building.

When players follow the signs leading to the Ferry Launch, they will arrive at a small pier with a fishing rod driven into it. A small tent, an overturned boat, as well as some netting can be found around the pier (along with a diamond dog).

When taking the road that branches off from the road towards Ferry Launch, players will arrive at a Pumpkin Farm, also known as Pumpkin Patch. The NPCs Pumpkin Pie and Beet can be found here.

Husky Diamond Dogs and Cockatrices can be found spawning nearby.

This article is a stub. You can help Legends of Equestria Wiki by expanding it.

Next to the Pumpkin Farm and the wheat farm, there is a Sugar Beet Farm.

The wheat farm can be seen while traveling between Ponydale and the Midway Village. It consists of several wheat plantations surrounded by a river, as well as a few buildings which are likely used to store the harvest. Cold Steel is the only NPC in this region.

Husky Diamond Dogs will spawn in some of the stands of wheat.

There is farming spot at farm which earth ponies can use to farm crops and flowers.

The Rooster Towers is a trio of wooden towers linked by bridges. Players entering The Heartlands from Cantermore should be able to spot this structure not too far off in the distance and will pass it on the way to Midway Village. The NPCs Purple Rain and Stella can be found here. Birch Dryads spawn in a small valley nearby.

There are similar towers in at least two other parts of the Heartlands.

A different tower design called Gryphon Roost by the development team and dubbed the Griffin Nest or Griffin Tower by players is located between Midway Village and the gate to Cloudopolis. It has no ramps, so its elevated levels are only accessible by flight or teleportation, except for a portal at the base (between the two guards) which takes you to one of the small platforms, which will allow you to jump to the main one where Cuckoo Lane is standing.

Near Gryphon Roost Iron Ore can be mined.

The Sparring area is a dedicated arena where players can engage in Player versus Player (PvP) combat in an open zone. This arena can be accessed by entering any of four portals around the fountain in Midway Village. Any player that enters the area can be attacked by other players. A transparent red wall bounds the area where PvP combat can take place.

Exiting the sparring area zone deposits a player's pony on a porch overlooking the fountain.

The Pet Graveyard can be found near the Cantermore portal. In the daytime, like everywhere else in the Heartlands, the area is clear, but at night however, a thick gray fog covers the graveyard while the squawking of crows can be heard as you enter it.

Pegasi will be unable to fly once they've entered the graveyard and if they attempt to do so, they will immediately land and the message 'A mysterious force prevents you from flying' will appear in the chatbox.

The Athmanes Ruins can be found in the massive pit near the medium-sized Rooster Tower. It also hosts the entrance to the Dig Site Dungeon. Quicksand can be found at a small campsite above the ruins.

The Heartlands Gate is a large monument of two stone Alicorns in the southeast of the Heartlands, on top of Constellation Hill. At the bottom of the monument is a portal to Cloudopolis.

Not far from the Gryphon Roost and Heartlands Gate, a massive crater with a strange torch-like object in the middle can be found.

Coal can be mined there.

Large black rock formations can be found in the river near the portal to Cantermore. There are dangerous lvl 45 Naiads there. Alicium Ore and Iron Ore can be mined near them.

Aerial view of the map

Part of the map while it was still under development

A camp of Husky Diamond Dogs

Reference to locations in the Heartlands before OSE9, based on images provided by the development team

Aerial map of the Sparring Arena provided by the development team

The sun above the Pumpkin Farm buildings, with both NPCs visible

The other half of the Pumpkin Farm buildings

A load screen for the Heartlands during OSE 9 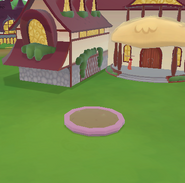