A unicorn is a playable race in Legends of Equestria, whose most notable trait is the ability to use magic. Unicorn players start off with 350 Health and 55 Energy at level 1.

The starting town and home for unicorns is Cantermore.

"Often considered higher cultured than the other races, Unicorns have an affinity for magic. They have a spell for every occasion; offensive, defensive, or just for fun. This boost in magical power comes with poor defensive power, however, so unicorns will want to keep their distance from enemies."

Unicorns have the slowest walking, galloping and sprinting speeds in-game, only being slightly slower than Pegasus by about 1%. This is made up for by the unicorns' ability to teleport.
Unicorns are also the only race that can actively wield magic. Their skills are listed below, according to talents:

Skills under the Base Talent are unlocked immediately, and award XP to all talents.

For over 5,000 years, humans have depicted or described Unicorns, less in their myths than in their natural history references. There are various theories about where the descriptions came from, including the idea that it's a mangled description of an Elasmotherium, rhinoceros, or gazelle. 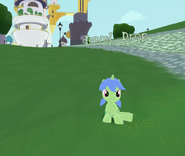 A unicorn in pre-alpha 4 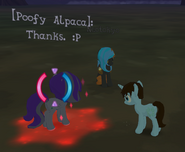 Heal being cast on another player 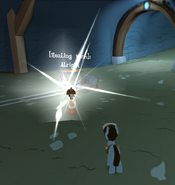 A unicorn casting the Teleport spell
Community content is available under CC-BY-SA unless otherwise noted.
Advertisement